Seeing ghosts just here and there, now and then, is a fairly common part of my life. I generally see them when I'm out and about maybe once or twice a year. Not a LOT, but often enough to know that ghosts aren't that rare, really. If I live in a haunted house-- which was pretty normal out in Ohio-- then I see them much more often of course.

She was in full color, 3-dimensional, and she was staring hard right at me as Sleep and I passed her in his car on our way to town. I just thought she was a very unhappy woman when I saw her for those few seconds. She looked to be in her 30s and had dirty blonde hair hanging lank and uneven to her shoulders, with sallow skin, dark rings and bags around her eyes, and she was too slender. I didn't really notice her clothes, but I got an impression of a print blouse maybe?

Anyway, she was standing on the porch of a house, almost leaning on the post by the steps down to the path and driveway. She was looking at me when I saw her and we made eye contact and I could tell she saw me. But she didn't move or blink. I noted her sickly appearance and wondered if she was on drugs or physically ill from some other issue. I sympathized with her, though. I could tell she was suffering and resigned to pain-- not a good place to be.

As we passed her, I turned my head to stare at her. She did not turn her head to look at me, but remained staring out towards the south. I realized she was fading out, and I could see through her and then she was gone. She just faded out of reality.

I realized then I had made brief eye contact with a dead woman. She looked a little like Chloe Sevigny: 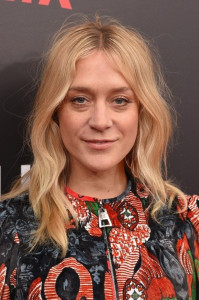 The house was a NICE one, on the shoreline with access to it's own dock onto the Sound. There are tall trees near it and neighbor's houses close by as well. The scenario did not look haunted at all. All the same, I felt a little guilty for driving on and leaving her there, all desolate.

But she was there. I saw her long enough to know my eyes weren't fooling me or anything. I wonder if she felt me coming? Or was it pure coincidence that I happened along when she was manifesting and looking in the right direction?

Regardless, I will be watching that area again every time I pass that house for a long time to come. Maybe I'll see the Wan Woman again.
Collapse